Symbols play an important part in communicating the idea of peace. Art is able to reach a part of people that transcends differences and prejudices. Here is the history of the most universal symbols for peace… 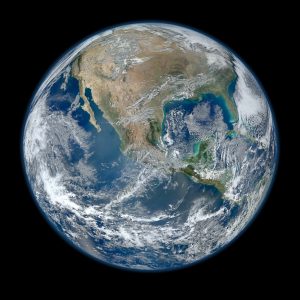 Picture of the Earth – Our consciousness was changed when humanity travelled into space, and looked back at the Earth. For the first time in history, we were able to see the Earth from the outside. Against the backdrop of utter darkness was a single delicate planet soaring through space, a colorful sphere with a thin shell of an atmosphere. Humanity became more aware of our planet, and its relation to our solar system and to the universe. And we became more aware of ourselves, and the interconnections between everything on this planet.

In 1950, astronomer Sir Fred Hoyle made a prediction on BBC radio, “Once a photograph of the Earth, taken from outside is available – once the sheer isolation of the Earth becomes known – a new idea as powerful as any in history will be let loose.” That prediction came true in 1960, and grew in significance as humans reached the Moon. Here are the three most influential examples…

The “Blue Marble” is the most widely distributed image in human history. The image, along with the other Earth images, is credited with inspiring the environmental movement, and an interest in global consciousness. The photograph, named AS17-148-22727 by NASA, is credited to the three astronauts aboard the Apollo 17 spacecraft – Eugene Cernan, Ronald Evans, and Jack Schmitt. The photograph is a part of a series of the only images of the full Earth ever taken by humans, and possibly the most beautiful one in existence. It has been shown as an example of Earth’s frailty, vulnerability, and isolation amid the vast expanse of space. Astronaut Jack Schmitt stated, “I’ll tell you, if there ever was a fragile appearing piece of blue in space, it’s the Earth right now.”

The Apollo 17 mission was the last manned flight to the Moon, and the last time humans were far enough away from the Earth to see it as marble in space. The Blue Marble photograph was taken on December 7, 1972. To the astronauts, the Earth had the appearance and size of a glass marble. At the time the picture was taken, the astronauts were 28,000 miles above the planet, moving at 40,000 km/hr. They were on the way to the Moon, where they would leave behind a plaque inscribed with the words, “May the spirit of peace in which we came be reflected in the lives of all mankind.” That plaque sums up the potential impact on humanity, not just from being on the Moon itself, but from looking up and seeing the Earth from that perspective.

The “Earthrise” photograph, named AS08-16-2593 by NASA, was taken on December 22, 1968, by the crew of the Apollo 8 spacecraft, Frank Borman, Jim Lovell, and William Anders. They were the first humans to leave the gravitational influence of the Earth and orbit another celestial body, against uncertain odds of succeeding. They are the only humans to ever witness an Earthrise, but thanks to photographic technology the entire world is able to see it. The photo ignited the imagination of humanity, and is considered one of the most significant photos ever taken. It happened spontaneously, when the astronauts were suddenly in awe of the view.

Three days later, the poet Archibald MacLeish wrote Riders on the Earth, in which he described the response to seeing Earthrise, “For the first time in all of time, men have seen the Earth. Seen it not as continents or oceans from the little distance of a hundred miles or two or three, but seen it from the depths of space; seen it whole and round and beautiful and small. To see the Earth as it truly is, small and blue and beautiful in that eternal silence where it floats, is to see ourselves as riders on the Earth together, brothers on that bright loveliness in the eternal cold – brothers who know that they are truly brothers.”

The “Pale Blue Dot” was taken on Valentine’s Day 1990 by the first human built object sent to leave our solar system. Four billion miles away from Earth, Voyager 1 turned its camera back towards its home planet and took a picture. The picture features a hazy view of black, with a couple of light streaks across it from the sun. Nothing exceptional, except a little blue dot that was almost missed. The full image size was 640,000 individual pixels, including the Earth at a mere 12% of a single pixel, but that was still big enough to make a huge impact on humanity.

Carl Sagan, who had worked with NASA on the golden record attached to the Voyager spacecraft, was the one who had suggested that they turn the craft around and take a picture of Earth. Vice Adm. Richard Truly, the head of NASA at the time, recalled the suggestion, “I did get a visit from Carl Sagan. We talked about a lot of things. And somewhere in that conversation he mentioned this idea. I thought, heck, with Voyager so far away, if it could turn around and take a picture of the different planets including the Earth, that that would really be cool.”

Carl Sagan would later write his famous ode to the Pale Blue Dot, “From this distant vantage point, the Earth might not seem of any particular interest. But for us, it’s different. Consider again that dot. That’s here. That’s home. That’s us. On it everyone you love, everyone you know, everyone you ever heard of, every human being who ever was, lived out their lives. The aggregate of our joy and suffering, thousands of confident religions, ideologies, and economic doctrines, every hunter and forager, every hero and coward, every creator and destroyer of civilization, every king and peasant, every young couple in love, every mother and father, hopeful child, inventor and explorer, every teacher of morals, every corrupt politician, every ‘superstar,’ every ‘supreme leader,’ every saint and sinner in the history of our species lived there — on a mote of dust suspended in a sunbeam. The Earth is a very small stage in a vast cosmic arena. Think of the rivers of blood spilled by all those generals and emperors so that, in glory and triumph, they could become the momentary masters of a fraction of a dot. Think of the endless cruelties visited by the inhabitants of one corner of this pixel on the scarcely distinguishable inhabitants of some other corner, how frequent their misunderstandings, how eager they are to kill one another, how fervent their hatreds. There is perhaps no better demonstration of the folly of human conceits than this distant image of our tiny world. To me, it underscores our responsibility to deal more kindly with one another, and to preserve and cherish the only home we’ve ever known. The pale blue dot.”

Read more about the effects of seeing the Earth from space…

The Peace Symbol – The “peace symbol” was originally the symbol of the U.K. Campaign for Nuclear Disarmament (CND). It was designed in 1958 by Gerald Holtom, a professional designer and artist and a graduate of the Royal College of Arts. The first public use of the symbol was on flags and placards during the 1958 Aldermaston march in England. It was designed from the naval code of semaphore (the flag signaling system), and the symbol represents the code letters for “ND” (Nuclear Disarmament). It is one of the most widely known symbols in the world. In Britain it is recognised as standing for nuclear disarmament – and in particular as the logo of the Campaign for Nuclear Disarmament (CND). In the United States and much of the rest of the world it is known more broadly as the peace symbol.

Read more about the history of the peace symbol… 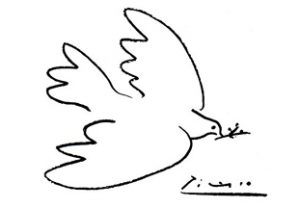 The Dove – The dove has been a symbol of peace and innocence for thousands of years in many different cultures. It is one of the most recognised symbols of peace. Its origins are from the story of Noah and the Ark, when a dove returned with an olive branch to herald in a new beginning. In ancient Greek mythology it was a symbol of love and the renewal of life. In ancient Japan a dove carrying a sword symbolised the end of war. But it was Pablo Picasso who made the dove a modern symbol of peace when he used it on a poster for the World Peace Congress in 1949. 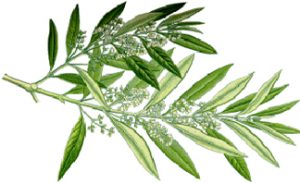 The Olive Branch – The olive tree has always been a valuable source of food and oil. In ancient Greece, wars between states were suspended during the Olympic Games, and the winners were given crowns of olive branches. The symbolism of peace may come from the fact that the olive tree takes a long time to produce fruit, so olives could only be cultivated successfully in long periods of peace. The olive branch is a part of many modern flags symbolising peace and unity, one well-known example is the United Nations symbol.