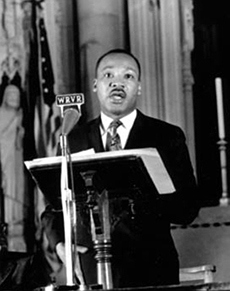 Fifty years ago, Rev. Martin Luther King, Jr. gave a speech called “Beyond Vietnam” which tied the civil rights movement to the growing peace movement. On April 4, 1967, King delivered a harsh critique of the Vietnam War at the Riverside Church in New York City. He rallied against the hypocrisy of standing up for the poor and oppressed in America, while America goes to war against the poor around the world.

He received a lot of criticism for that speech, but King realized that there can be no true civil rights until there is peace. King anticipated the reaction, and understood the risks. In the speech he mentions those who did not want to discuss peace, who said “peace and civil rights don’t mix”. His response was, “They do not know the world in which they live.”

In the speech, King called for a “true revolution of values” that would lead to a life of love, and a “beautiful symphony of brotherhood”.

Martin Luther King, Jr. was killed exactly one year after this speech. He explained soon before that “only when it is dark enough, can you see the stars.” 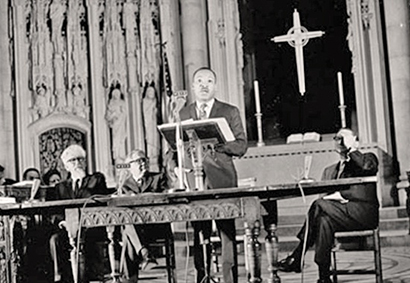 Here are some excerpts from the speech “Beyond Vietnam”…

It is with such activity that the words of the late John F. Kennedy come back to haunt us. Five years ago he said, “Those who make peaceful revolution impossible will make violent revolution inevitable.” Increasingly, by choice or by accident, this is the role our nation has taken, the role of those who make peaceful revolution impossible by refusing to give up the privileges and the pleasures that come from the immense profits of overseas investments. I am convinced that if we are to get on to the right side of the world revolution, we as a nation must undergo a radical revolution of values. We must rapidly begin, we must rapidly begin the shift from a thing-oriented society to a person-oriented society. When machines and computers, profit motives and property rights, are considered more important than people, the giant triplets of racism, extreme materialism, and militarism are incapable of being conquered.

A true revolution of values will soon cause us to question the fairness and justice of many of our past and present policies.

A true revolution of values will soon look uneasily on the glaring contrast of poverty and wealth. With righteous indignation, it will look across the seas and see individual capitalists of the West investing huge sums of money in Asia, Africa, and South America, only to take the profits out with no concern for the social betterment of the countries, and say, “This is not just.” It will look at our alliance with the landed gentry of South America and say, “This is not just.” The Western arrogance of feeling that it has everything to teach others and nothing to learn from them is not just.

A true revolution of values will lay hand on the world order and say of war, “This way of settling differences is not just.” This business of burning human beings with napalm, of filling our nation’s homes with orphans and widows, of injecting poisonous drugs of hate into the veins of peoples normally humane, of sending men home from dark and bloody battlefields physically handicapped and psychologically deranged, cannot be reconciled with wisdom, justice, and love. A nation that continues year after year to spend more money on military defense than on programs of social uplift is approaching spiritual death.

A genuine revolution of values means in the final analysis that our loyalties must become ecumenical rather than sectional. Every nation must now develop an overriding loyalty to mankind as a whole in order to preserve the best in their individual societies.

This call for a worldwide fellowship that lifts neighborly concern beyond one’s tribe, race, class, and nation is in reality a call for an all-embracing and unconditional love for all mankind. This oft misunderstood, this oft misinterpreted concept, so readily dismissed by the Nietzsches of the world as a weak and cowardly force, has now become an absolute necessity for the survival of man. When I speak of love I am not speaking of some sentimental and weak response. I’m not speaking of that force which is just emotional bosh. I am speaking of that force which all of the great religions have seen as the supreme unifying principle of life. Love is somehow the key that unlocks the door which leads to ultimate reality. This Hindu-Muslim-Christian-Jewish-Buddhist belief about ultimate reality is beautifully summed up in the first epistle of Saint John: “Let us love one another, for love is God. And every one that loveth is born of God and knoweth God. He that loveth not knoweth not God, for God is love. If we love one another, God dwelleth in us and his love is perfected in us.” Let us hope that this spirit will become the order of the day.

We can no longer afford to worship the god of hate or bow before the altar of retaliation. The oceans of history are made turbulent by the ever-rising tides of hate. History is cluttered with the wreckage of nations and individuals that pursued this self-defeating path of hate. As Arnold Toynbee says: “Love is the ultimate force that makes for the saving choice of life and good against the damning choice of death and evil. Therefore the first hope in our inventory must be the hope that love is going to have the last word.”

We are now faced with the fact, my friends, that tomorrow is today. We are confronted with the fierce urgency of now.

We still have a choice today: nonviolent coexistence or violent coannihilation. We must move past indecision to action. We must find new ways to speak for peace in Vietnam and justice throughout the developing world, a world that borders on our doors.

If we will but make the right choice, we will be able to speed up the day, all over America and all over the world, when justice will roll down like waters, and righteousness like a mighty stream. 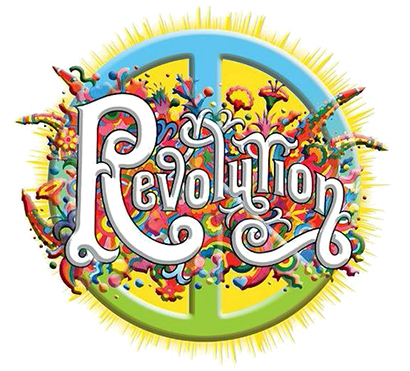 Confronted with the fierce urgency of Now